The city of Thonis-Heracleion was a city of two names, and for good reason. This city was the central gateway between the trade networks of the ancient Greeks and the ancient Egyptians on the Mediterranean Sea. Thought in the modern era to be a rumored city like that of Atlantis, it was almost wrote off as such when it was recently discovered by underwater archaeologists in 2000.

Thonis-Heracleion is currently conservatively believed to be dated to around 8th century BCE. It would survive for nearly a millennium against the brutal earthquakes and other natural disasters that plagued the sandy soil of Egypt. Its influence slowly slipped away after Alexandria was established by Alexander the Great. Alexandria took over the principle duty of acting as a centralized point of trade between Greece and Egypt under Alexanders new empire. 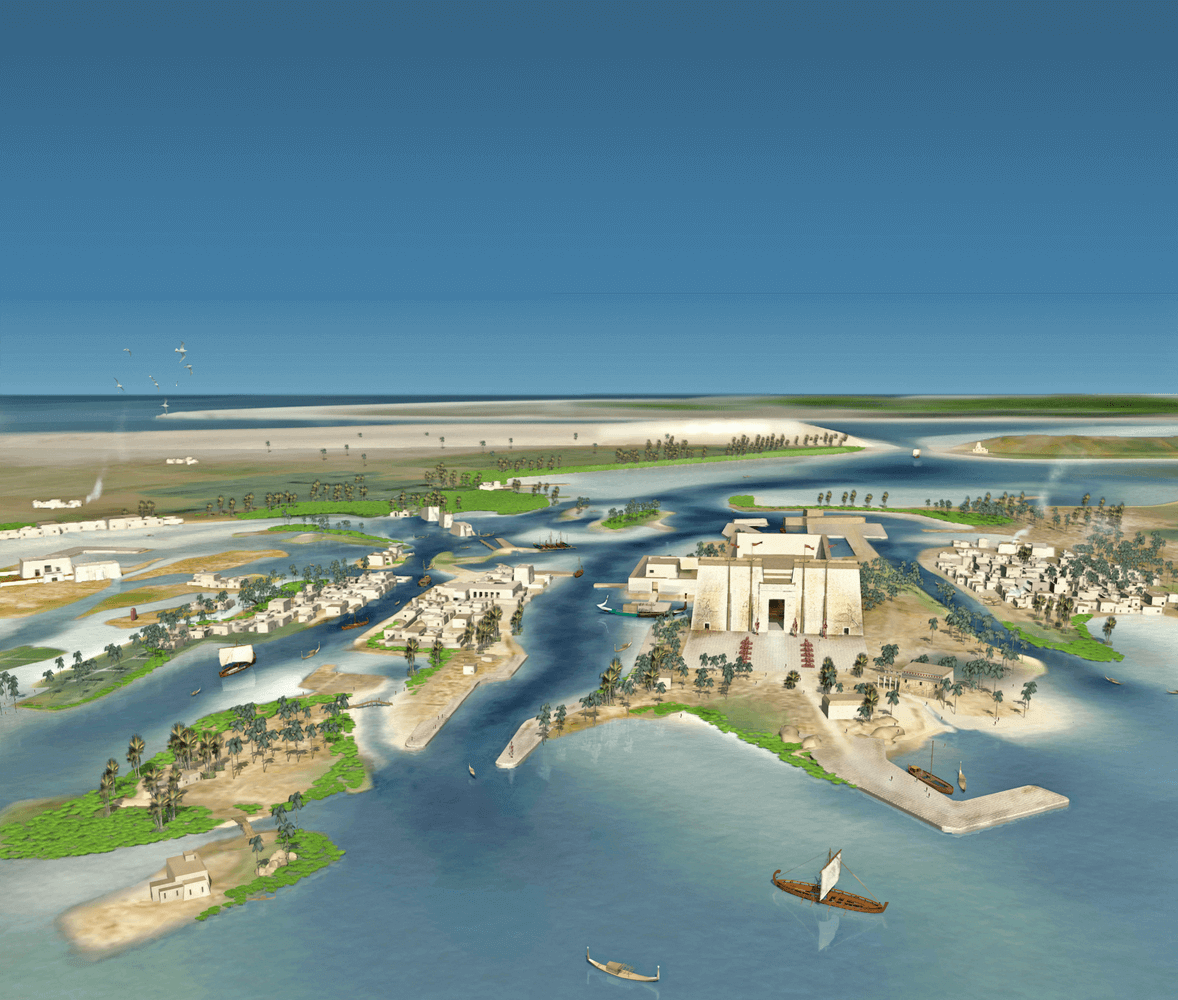 Eventually though, the city succumbed to one last fatal natural disaster and slipped beneath the waves where it lay for modern archeologists to discover. Many researchers believe that the destruction of the city is greatly tied to the Thera Eruption was a catastrophic volcanic eruption on the island of Santorini the caused the complete devastation of the Minoans and plunged the region into a period of political instability and chaos that would ultimately result in the complete destruction of the region during the transition between the Bronze Age and the Iron Age.

It was later discovered right at the turn of the 21st century CE by underwater archaeologists and this has given us great insight into ancient Egyptian culture and architecture. Most of the massive statues and other objects are in pristine condition. It has taken great efforts to remove these artifacts from their resting place at the bottom of the sea, but the details they reveal about Egyptian life at the time are priceless.

The earliest accounts of the city of Thonis-Heracleion come from Greek historian Herodotus. He gives a description of a great temple to Khonsou or the son of Amun (Hercules to Greece) built where the Greek hero Herakles had landed in Egypt. Herodotus also describes how Paris and Helen of Troy visited the city fleeing the Greek king Menelaus before the outbreak of the Trojan War. This is very interesting because it would suggest that the city of Heracleion existed before the Bronze Age Collapse and researchers are only putting the settlement at 800 BCE when the supposed Egyptian dark ages ended. However, there have been many settlements built along the alluvial fan at the delta of the Nile River and this begs the question as to weather Herodotus is correct in describing the city, which he is not wrong about much. 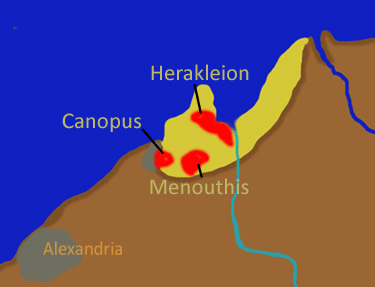 About four hundred years later another Greek geographer named Strabo visited Thonis-Heracleion and observed it was located at the mouth of the Canopic branch of the Nile, directly east from Canopus. According to modern archeology and ancient accounts the city was based around the Temple of Amun and there was a substantial network of canals that facilitated maritime travel. There were all kinds of inlets and places to dock and according to researchers this must have been quite a lively port in its day. There were massive 16 foot statues and many other classical Egyptian structures from the New Kingdom period. 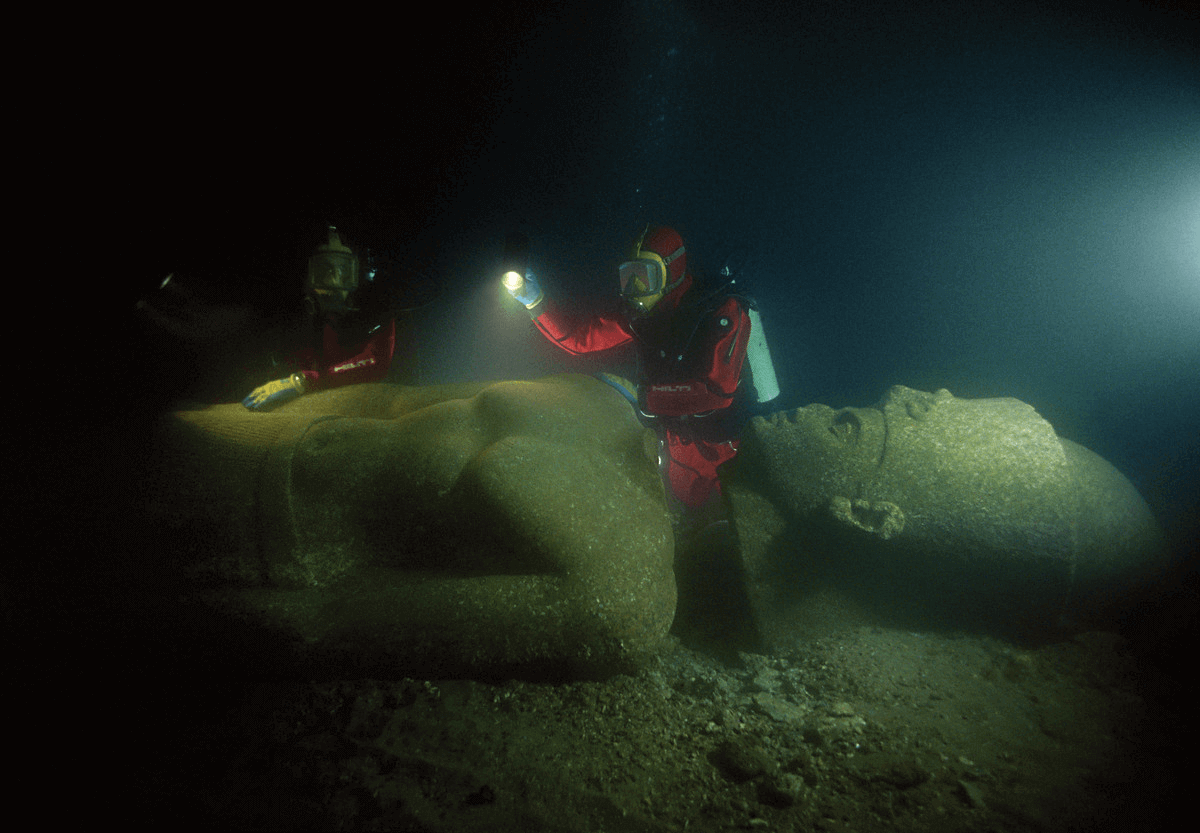 The city actually enjoyed a unique prosperity due to its prime trading location on the Mediterranean. Not only was the port city the main point of contact between the Greeks and the Egyptians but it is also known that the seafaring Phoenicians traded there and one can only speculate that traders from all throughout the world ventured there throughout its near 1000 year existence.

Thonis-Heracleion was only one city along the interconnected trade routes of the ancient Mediterranean sea. Before it was all conquered under later empires, the early governments existed as independent city states. These trade networks were essential for the diffusion of ideas, inventions, goods, rituals and many other cultural facets. The city became the first real international port in the world. This trade is what gave the city its great prosperity as it was essential to pass through in order to access the rest of Egypt. Based on the archeological evidence, this city saw its height between the 6th and 4th centuries BC. This fits with the theory it saw decline when Alexandria began to take over as the principle Egyptian port under Alexander the Great's empire.

Thonis-Heracleion began to decline long before it actually was destroyed by natural elements in 900 AD. Up until Alexander the Great conquered Egypt and established Alexandria in 331 BC, this city was the premier point between Greek and Egyptian civilization. However, under Alexander's new unified empire he established a new center for culture on the Mediterranean. The new city called Alexandria would assume all of Thonis-Heracleions old roles such as managing trade between empire, but it would also server as a center for education and more or less one of the capitals of the empire. Most likely the inhabitants of the city realized its susceptibility to earthquakes and relocated many years before it was actually destroyed for good.

The city of Thonis-Heracleion sank much like that of Port Royal during the Golden Age of Piracy. The ancient Egyptians used a lot of stone in their building construction. This was most often built upon the sand and silt at the base of the river delta. However, this soil is not stable and is actually very saturated with water from the surrounding area. When an earthquake hits and the sand vibrates it loses its normal structure. That sand quickly breaks apart into the water through a process called liquefaction. 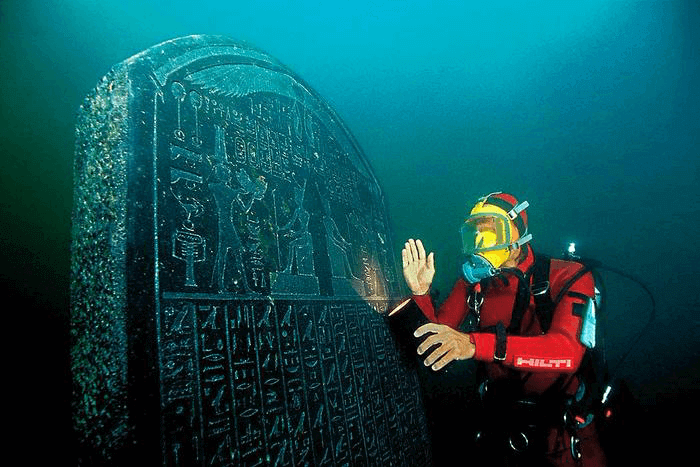 When this occurs, anything heavy such as a massive stone statue, building or monument will sink right into the sand. The same thing happened in Port Royal because they built the traditional European brick and mortar buildings on a small piece of beach in the port of Kingston, Jamaica. These earthquakes and destruction most likely occurred multiple times during the cities history and it was only finally abandoned after the dual influences of utter destruction and the rise of alternative cities such as Alexandria.

The process by which this occurred however, left the structures in remarkable condition, preserved for over one thousand years underwater. If entire cities like this are being found, imagine what is only waiting to be discovered beneath the oceans. Remember, thousands of years ago the water was much more shallow as more of Earth's water existed as glaciers. This means that all of the evidence of ancient humans around the world most likely lies buried beneath several feet of water at this point.

The discovery of Thonis-Herecleion was nothing short of a miracle for the study of the ancient past. Originally looking for French warships, Frank Goddio and his team stumbled onto massive Egyptian statues laying on the bottom of the sea in 2000 CE. Realizing they found something important they began using specialized archaeology techniques along with high tech survey equipment to begin an underwater excavation. His team IEASM is working in collaboration with the Egyptian Supreme Counil of Antiquities and they are currently working to excavate the entire site which lays about 6.5km off the coast of Alexandria. Some of the things recovered from the site of Thonis-Heracleion are:

Due to the nature of Thonis-Heracleion's destruction all of the artifacts and structures are extremely well preserved. None of the statues were broken and none of the tablets fractured. More importantly, Goddio and his team have been able to reconstruct what life was like in ancient Thonis-Heracleion and the advanced trade network that existed in that period.

For centuries, archeologists and Egyptologists have been puzzled over Thonis-Heracleion. Based on their descriptions in texts it would appear the writers are talking about the same city. But some modern researchers were having doubts and began to think maybe there were two cities. But Goddio's artifacts and discoveries have settled this once and for all that it is a city of two names, and that perfectly describes the character of the city. It truly was the first international port and a collaboration of the two major civilizations at the time. In order for a city like this to operate there needed to be systems of monetary exchange that were accepted by all parties and therefore some level of sophisticated communication between leaders and officials.

You can also check out the Frank Goddio Website.