One of the oldest calendars ever found was in the Nabta Playa region, built 2,000 years before Stonehenge.

This amazing structure also comes alongside the discovery of unique stones marking deep pits in the desert. The origins of the stones were not found near Nabta Playa, but again like the other ancient megalithic structures were quarried and brought there. Some archaeologists believe that these are ancient burial sites that mark the tombs of important people. Yet no bodies have ever been found so this leads others to maybe believe they have practical functions. Inside the pits have been found sculptures and other crafted stones.

Egypt is believed to be one of the six independent areas of the world to develop an individual culture and civilization. Known as the cradle of civilization, along with Egypt the others that sprung up in this same time period around the world were Sumer, the Harappan, China, along with Norte Chico and the Olmec in the Americas.

The rise of civilization in Egypt occurs around 5500 BCE with the Badarian culture (5500-3800 BCE) that was based on cattle farming and cereal cultivation. By this period the oasis that was created in the Nabta Playa basin had all but vanished as the monsoon winds moved towards more southern latitudes. This forced the existing human cultures to move towards the Nile in order to have enough food and resources to survive. Egypt at this time looked nothing like you think of during the Dynastic period.

This new culture was not based on foraging but instead began practicing organized agriculture along the Nile as part of the Neolithic Revolution. During this period there developed two major regions of Egypt during this period that acted more as less as independent states called Upper and Lower Egypt. The land in the Nile River delta towards the Mediterranean Sea is known as Lower Egypt and the portion of Egypt that thrived in the Nile valley is Upper Egypt. This is because the Nile originates in the center of Africa and travels northward towards the Mediterranean. It is one of the only north flowing rivers in the world.

Upper Egypt is usually classified as the land of the lotus and Lower Egypt was classified as the land of the. However, over time both the pantheons and symbols of each would become so interwoven it would be hard to tell them apart. The exact process of Egyptian state formation is hard to trace but it can begin to be seen with the development of craft and luxury goods within graves that promotes the idea of a sophisticated society. It is important to note that ideology was very important from the beginning of Egyptian culture and their authority was deeply connected to the divine. This meant the Egyptian leaders were known to have an elaborate system of symbols and rituals that all were designed to promote unification of the culture and empire.

Egypt can be easily contrasted with Sumer during this early period as these states developed with low population density and plenty of vacant land. The development of the states could also be attributed to the rapid growth of the large human settlements at the time that would serve as the basis for the rest of Egyptian civilization. It can also be contrasted with the Harappan civilization which had developed much more sophisticated and well planned cities during this time period.

Forming a civilization along the Nile River had its perks and drawbacks. Once a year the Nile would flood from monsoon rains in Ethiopia which would deposit fertile silt and nutrient rich soil. This fertile soil was prime for growing crops but the flooding of the Nile was unpredictable. Therefore this is one of the reasons for the development of the first calendars so they could better track the flooding months. The calendar of the ancient Egyptians is the model for the calendar we use today. 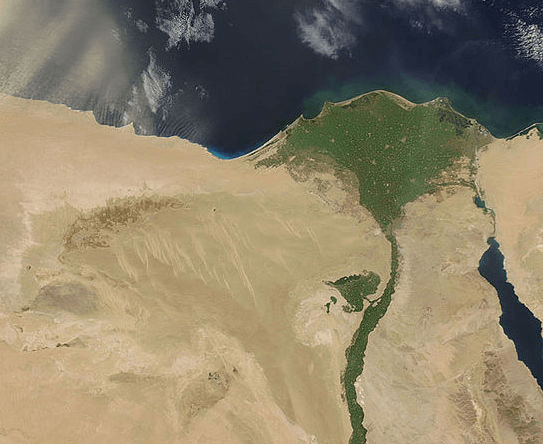 The Egyptians broke down the Nile flooding into two periods, inundation and resurgence. The Egyptians would harvest their crops when the water was lowest.

During this period the ancient Egyptians dug wells, built dikes and walls and also made advancements in mathematics and geometry.

It is during this period of around 5000 to 3200 BCE that the Egyptian hieroglyph language system is developed and we start to get a real written history of the civilization. Writing was formerly thought to have been brought to Egypt via contact with Sumer. Now, it appears independently invented and based on excavations at the city of Abydos writing may have been invented in Egypt before Sumer. In fact, by the time Sumerians are still using pictograms to represent mathematical concepts the Egyptians were using their written language to represent sounds and phonetics.

The Egyptian hieroglyphs appear to be developed by priests as a script that was easier to produce on papyrus-reed paper using ink than on clay tablets. This language was used for trade and record keeping along with funeral rituals as it was found on painted pots in tombs. The first hieroglyphs were cursive and much easier to use. Only consonants were written and eventually the development of writing even contributed to the unification of Egypt as a whole under king Narmer in 3100 BCE. This event appeared to have great influences on the Egyptian writing system.

The next period in Egyptian history was the Amratian Period between 3800 BCE and 3500 BCE. During this time the two independent kingdoms of Upper and Lower Egypt developed and while sharing a similar mythology, traditions and beliefs, their culture and technologies were slightly different. There was a marked increased in trade during this period and the advent of copper metallurgy, specialization of pottery and basalt crafting. Pottery found at the capital of Lower Egypt was much less sophisticated than the artifacts found at the capital of Upper Egypt. It is during this period that both of these capitals are established as well. The capital of Upper Egypt is known as Hierakonpolis and the capital of Lower Egypt is named Buto. Other major cities include Naqada and This.

At this time there was a large agricultural surplus that was being controlled by the elite, forming the basis for the first concepts of wealth. The elites in the ancient period used this agricultural surplus to initiate a series of public works projects that created massive irrigation systems and canals. These were the first major monument, tomb and public building construction projects which would lay the foundation for Egyptian civilization for millennia to come. Many researchers believe that the surplus acquired by the elite during this period was used to relocate people closer to the Nile where an agricultural system began to develop instead of the pastoral society of before.

The city of Hierakonpolis or Nekhen was known as the city of the Falcon and was a small community in 3800 BCE of maybe several hundred people. Over the next three centuries however, this number would increase to over 10,000. The booming pottery industry at this city would eventually lead to an increase in its overall wealth. In fact, it appears that pottery was the central industry of this city and one of the possible reasons for its abandonment.

One one of the oldest known homes was discovered here at Hierakonpolis. It was a potters house that was well preserved based because he actually baked his own house when the kiln set it on fire. Based on the further excavation of Hierakonpolis there developed differences in residences as artisans lived in larger houses with separate compounds whereas most people lived in clustered mud houses.

Massive holes used to create a shrine and temple complex. Earliest known temple in Egypt. The king be seated on the throne would oversee a sacrifice of an animal to Horus the god of the sky and everything. It is believed that this early temple was made out of cedar that could have been imported from Phoenicia. This would be the prototype for all of the later temple complexes to come.

There was also discovered a cemetery where many prominent citizens are buried along with average citizens. People are distinguished based on what they are buried with. Some elites are buried with specialized Plum Red pottery with tombs that feature images of the ruler smiting enemies and sitting under an awning. All of this is indicative of a class based structure.

A lot of the archaeological evidence of this time period is buried underneath great quantities of silt from the Nile. There is one that is known called Maadi which was a major trading center around 3650 BCE. Goods from Phoenicia were known to have been traded there and even some possibly from Mesopotamia. The idea of trading between civilizations is also fueled by evidence found at Nagada in Upper Egypt. At this site it was discovered a seal of Mesopotamia along with pots adorned with images of Mesopotamian boats and other motifs found in Mesopotamia. This suggests widespread trading and interaction between the civilizations of Phoenicia, Mesopotamia and Egypt in the ancient period.

By about 3500 BCE there began to be ecological problems within Egypt caused by an overgrazing of the land by the sheep and goats along with the overuse of tinder by the kilns that produced pottery. This caused erosion and eventually the fragile ecological balance between desert and grassland collapsed. The deforestation most likely compounded problems. After the Amratian period there was the Gerzean Period between 3500 BCE and 3100 BCE that saw the unification of Egypt along with the increase in scale and scope of trade and culture development. It was during this period that saw the widespread and extensive use of Egyptian trade networks that established contact with other parts of the world such as southwest Asia and Mesopotamia.

It was during the Gerzean period that the civilization of Sumer was experienced the height of its Uruk Period and the city-state of Uruk was probably known throughout the region so it makes sense a trade network was established. This trade network is corroborated in the archaeological record by boat symbols and a Mesopotamian seal discovered in Egyptian excavations.

There was a increase in the scale of trade and craft good production along with developments in pottery and metallurgy. New items such as basalt bowls, gold and copper tools began to be heavily produced during this time period Also during this period social and economic inequalities grew between the artisans and the farmers. This is evidenced by the difference in burial mounds and artifacts. There even grew a rift between Upper and Lower Egyptian kingdoms as cultural differences led to different political policies.