It is known that humans have long existed in Africa for many hundreds of thousands of years throughout the Pleistocene epoch as the Aterian tool-making industry was influencing the Egyptian region around 40,000 years ago. Another tool industry that developed during this time period was the Khormusan industry that developed between 40,000 and 30,000 years ago. These advanced humans created tools from stone, bone and hematite. The stone arrow heads they created greatly resemble those found in the Americas but no bows have been excavated.

The earliest human skeleton recovered from the Egyptian region was known as the Nazlet Khater skeleton and was found in 1980. It was dated to be approximately 35,100 - 30,360 years ago and is the only complete modern human skeleton that has been recovered from the Paleolithic epoch in Africa. The Khormusan industry appears to disappear around 16,000 BCE with the introduction of the Gemaian industry among other cultures. 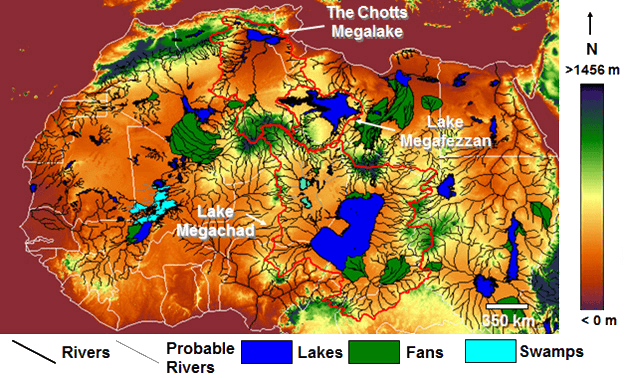 However, modern science has been finding more and more evidence to suggest this was actually the case. The Nile River never used to run from south to north from Lake Victoria but instead ran from east to west across the Sahara Desert. Overall the entire paleoclimate of Earth was drastically different than what we see now and this sheds great light on where more Cultures would have developed.

This also has great implications for the Out of Africa hypothesis as most researchers believe the path taken was up from the Nile River. But if the Nile River did not exist in this capacity we need to examine human migration in terms of the climate that did exist during the Last Glacial Maximum and the end of the last Ice Age. 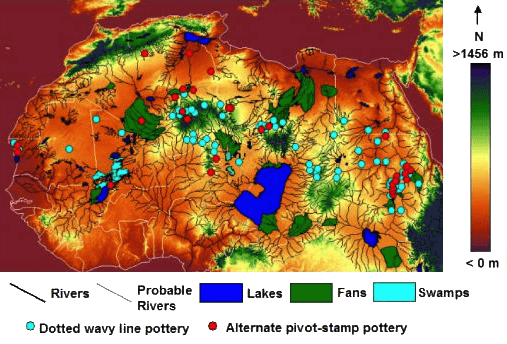 Researchers have discovered plentiful amounts of ancient fish bones that suggest there was once a massive lake, rivers and other streams in the upper Sahara. During wetter periods fish and other aquatic life swam all throughout upper Africa and this may have happened before in history. There have also been excavated many species of animals that simply do not fit in a desert ecosystem, and give support for the idea of a green Sahara and possibly even other parts of Africa.

The presence of pottery during this period suggests that most civilization may not have been as nomadic as historians and archaeologists would have originally had us believe. All around the ancient lakes and river beds of the green Sahara there has been both wavy line and pivot-stamped pottery found which is indicative of very early industries. Pottery would not easy to carry around if all of the ancient humans at this time were nomadic and this looks more like ancient settlements set up along the ancient waterways.

At the end of the last Ice Age, the Sahara Desert was just as dry and uninviting as it is today. But sandwiched between two periods of extreme dryness were a few millennia of plentiful rainfall and lush vegetation.During these few thousand years, prehistoric humans left the congested Nile Valley and established settlements around rain pools, green valleys, and rivers.The ancient climate shift and its effects are detailed in the July 21 issue of the journal Science.When the rains cameSome 12,000 years ago, the only place to live along the eastern Sahara Desert was the Nile Valley. Being so crowded, prime real estate in the Nile Valley was difficult to come by. Disputes over land were often settled with the fist, as evidenced by the cemetery of Jebel Sahaba where many of the buried individuals had died a violent death.But around 10,500 years ago, a sudden burst of monsoon rains over the vast desert transformed the region into habitable land.This opened the door for humans to move into the area, as evidenced by the researcher's 500 new radiocarbon dates of human and animal remains from more than 150 excavation sites."The climate change at [10,500 years ago] which turned most of the [3.8 million square mile] large Sahara into a savannah-type environment happened within a few hundred years only, certainly within less than 500 years," said study team member Stefan Kroepelin of the University of Cologne in Germany.Frolicking in poolsIn the Egyptian Sahara, semi-arid conditions allowed for grasses and shrubs to grow, with some trees sprouting in valleys and near groundwater sources. The vegetation and small, episodic rain pools enticed animals well adapted to dry conditions, such as giraffes, to enter the area as well.Humans also frolicked in the rain pools, as depicted in rock art from Southwest Egypt.In the more southern Sudanese Sahara, lush vegetation, hearty trees, and permanent freshwater lakes persisted over millennia. There were even large rivers, such as the Wadi Howar, once the largest tributary to the Nile from the Sahara."Wildlife included very demanding species such as elephants, rhinos, hippos, crocodiles, and more than 30 species of fish up to 2 meters (6 feet) big," Kroepelin told LiveScience.A timeline of Sahara occupation [See Map]:22,000 to 10,500 years ago: The Sahara was devoid of any human occupation outside the Nile Valley and extended 250 miles further south than it does today.10,500 to 9,000 years ago: Monsoon rains begin sweeping into the Sahara, transforming the region into a habitable area swiftly settled by Nile Valley dwellers.9,000 to 7,300 years ago: Continued rains, vegetation growth, and animal migrations lead to well established human settlements, including the introduction of domesticated livestock such as sheep and goats.7,300 to 5,500 years ago: Retreating monsoonal rains initiate desiccation in the Egyptian Sahara, prompting humans to move to remaining habitable niches in Sudanese Sahara. The end of the rains and return of desert conditions throughout the Sahara after 5,500 coincides with population return to the Nile Valley and the beginning of pharaonic society.

There are some researchers that believe the Great Sphinx of Egypt was actually built during the end of the last Ice Age and not during the later Dynastic era as is suggested by modern archaeology.

This view has been accepted by many prestigious geologists who examine the precipitation patterns on the rock and suggest it could have only have been eroded by torrential rains during this era. To some this seems absurd but the ancient city of Gobekli Tepe existed during this time and it was sophisticated and developed.

This has turned mainstream archaeology on its head and man scholars refuse to believe these published finds because it does not fit with their paradigm on the rise civilizations which is based on the cradle of civilization model. Yet these new updates have led other more enlightened researchers to believe that civilizations may have developed much earlier than previously accepted.

Despite all of what archaeology has done, officially most will still give the answer that Sumer was the first created civilization around 3,500 BCE. If you ask a creationist the answers just devolve into religious babble that makes no scientific or logical sense. But to them this is lack of scientific logic and complete disregard for physical data can be compensated by sheer faith and belief.